When you’re struggling with Imposter Syndrome, it can feel like a very lonely place to be.

A particular kind of coalition of extreme, unfounded, self-doubt, and anxiety about being found out as being a fraud, the Imposter Phenomenon finds its owner divorcing themselves and their abilities from their successes.

Constantly feeling on edge, in case someone discovers the truth.

Unable to accept praise and enjoy the fruits of their (often very hard-worked) efforts.

Worried for their job and their reputation.

Caught between being offered more responsibility as a result of their achievements, and feeling terrified that this time it will be far too much and the whole chebang will come tumbling down.

I know, because I’ve been there. And here, I’ve put my big girls pants on and am telling my personal story about struggling with Imposter Syndrome for the first time.

I’m telling it because if you’re feeling this way, I want you to know others feel it too. And those others are also successful, able people.

And I’m telling it because I’ve seen the light in people’s eyes when I’ve explained about the Imposter Syndrome, and when they’ve realised they are not the only one carrying this secret about how they feel around with them.

When they realise they are not crazy and that they can, with some help, overcome it.

So, this is my story:

Back in 2015, a few weeks before leaving my role as managing director of a retailer, I was having a conversation with my boss, the owner of the company –   a warm, caring woman, who I’d known and worked closely with for more than a decade. She said to me: “Jo, what concerns me is that you sound like you’ve lost all your confidence”.

Inwardly, I half smiled and half cried. I was thankful we were talking on the phone, so she couldn’t see me sit down, put my head in my hands and shake my head. Her comment was the most ironic I’d ever heard.

I knew everyone thought I was confident. In my best moments, I genuinely was. Am. But inside, for many years, despite having a feel for where my strengths lay, having times where I could recognise things were going well and that we’d achieved good things, and despite having good self-esteem generally, I had spent much of my time at work feeling anything but self-confident.

Inside, I felt certain that someone was going to soon find out that I was not as good as they thought I was. That I was not actually capable of doing the things they were asking me to do, and that if it weren’t for a combination of good fortune, lucky timing and the ability of other people around me, I wouldn’t have achieved any of the things they gave me credit for, and they would have discovered this long ago.

It didn’t always feel this way. There were times – sometimes for quite long periods of time – where I was able to see categorically that my involvement in a project had been crucial, where I could point to a specific decision I’d made or idea I’d had, or to the way I’d led it that had been a key part of a successful achievement.

And I remember one time, when feeling worried about taking on a lot more responsibility at work, sharing my fears about not being able to do it with my husband. He looked at me, perplexed, and said: ”Well, just do what you’ve always done – recruit good people around you who are better than you at the things you’re not so good at.” And I could accept that then as being strong leadership and good decision making, yet at other times I saw that same thing as the absolute proof that I was an imposter.

For much of my career, I felt I didn’t deserve any of the praise and recognition for “my” achievements. Even when I recognised they were praising me for something I’d actually done, I felt like it wasn’t really necessary – I hadn’t done anything out of the ordinary. In fact, I was just very ordinary. I brushed off praise (it annoyed my fabulous P.A so much she actually called me out on it eventually, in what was one of the most helpful pieces of feedback I ever received). I just didn’t feel it was warranted.

And I had often worried that when the moment came – when my lack of ability was finally discovered – I would surely lose my job. And then nobody would ever employ me again, it having been uncovered that I was a fraud, knowing I was not very good at my job and yet still accepting credit, praise and promotions.

Over the years, even when my Imposter wasn’t shouting at its loudest, feeling this way led me to work in ways that caused me stress and, ultimately, burnout:

The irony of the latter of course being that often as not, the results I achieved in turning a problem round were often so good, that it led to significant career highs, and genuinely great achievements. Initially this would bring about a feeling of great relief for me, sometimes even a feeling of euphoria. Often though, once the dust had settled on these successes, I was left with a feeling that they didn’t really count, having stemmed as they had from an initial failure.

And so back to that conversation with my boss.

Finally, having decided to leave the company and working my notice, I was free of that worry of being found out. I was already leaving, and so there were no longer any significant consequences for me, if it was discovered I was a fraud. I no longer had to pretend, and could be honest about how I felt…and the lack of confidence finally showed through.

After I left that role, I worked with a coach, and I recognised this, for the first time, to be the Impostor Syndrome. I’d never come across it before.

I was helped to look for evidence of my own strengths and my successes, to confront them and accept them inwardly as being genuine and real. Mine, and deserved.

I learned about the difference between growth and fixed mindset, and set about developing more of a growth mindset for myself.

I worked on my perfectionism – I particularly remember a period where I had a poster on my office wall opposite my desk which said “Aim for Progress, Not Perfection”, to remind me that things don’t have to be perfect to be good enough. I’m still a work in progress, and imagine I always will be, particularly during stressful periods.

I looked back at when this feeling of being a fraud and not really knowing my stuff when others seemed so sure that I did may have started. And while I can’t remember exactly when the first time was that I felt like an imposter or when it first felt like it had a really firm grip around my shoulders, I’m pretty sure the way my Dad helped me get my first job by getting me an opportunity to talk to someone he knew was a key moment.

Feeling that I had not achieved that first post-graduate role 100% by myself somehow sowed the seeds that I hadn’t proven myself in order to get that job, and maybe I wasn’t actually good enough for it – it was just someone doing my dad a favour.

And as time progressed, that morphed into the thought that I didn’t deserve this career because I hadn’t been good enough to get my first job on my own merits. And so maybe I wasn’t good enough for any of it. Just pretending.

And I carried that with me, on and off. For twenty years.

These days, I have a totally different career, and I work for myself. I’m pretty sure one of the attractions of that is that, when the impostor strikes (which it still does occasionally), I don’t really have to worry about the impact of my employer finding me out.

And I can now see that it doesn’t matter how that first job came about, what matters is what I did with it once I had it. That while one employer may be able to be fooled into thinking I was good enough to promote me, it’s unlikely every one of the employers I’ve had that has promoted me would be equally fooled. And I certainly wouldn’t consider any of those companies’ leaders to be fools – every one of them is highly successful in their own right.

And I also have the knowledge and strategies in place now to be able to kick that fraudulent-feeling into touch again pretty quickly if it does rear its ugly head.

If reading this blog has resonated with you, and you’d like some help to overcome your imposter and the stress your imposter syndrome is causing you, please get in touch. I’d love to help.

You know I will “get it” – I have been there, and got the T-shirt. I know that the feelings are real and how debilitating they can be, and I could never dismiss them as being silly or unimportant.

But I also know the beliefs leading to that feeling are not logical and are not based in truth. Because the imposter can only, by definition, exist, when there is demonstrable evidence of your success.

I have the professional experience and skills to help you come to see and believe that for yourself. So you can unlock the cycle of anxiety, lack of confidence and overwork that goes with feeling like a fraud, and reduce your stress levels, genuinely believe in your ability and have much more fun achieving big things than you’ve had of late. And you deserve that.

I’m Jo Lee, the No Stress Success Coach. I help ambitious people achieve the successful, enjoyable work life they want, without the stress, self-doubt and exhaustion they don’t. I help you make changes that mean you control your work rather than it controlling you, so you’re able to switch off, worry less, sleep better, work less and live more.. So you feel balanced, not burned out.

If anything in this blog post resonates with you, and you’d like to find out more about how coaching works to help you manage stress or overcome Imposter Syndrome or what coaching with me might be like, please get in touch for an informal chat or to arrange a free initial consultation, or  come and get to know me and get free advice, support and inspiration in my free Facebook Group, The No Stress Success Network. 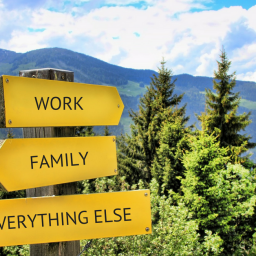 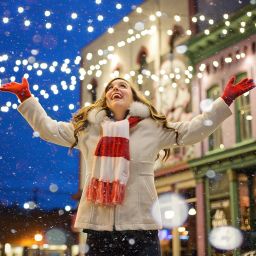 The Secrets for Having a Stress Free Christmas 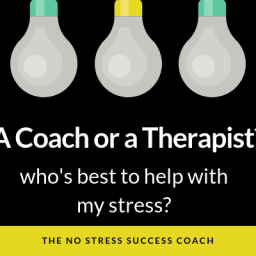 Dealing With Stress: How to Choose Between Coaching and Therapy for Stress Management 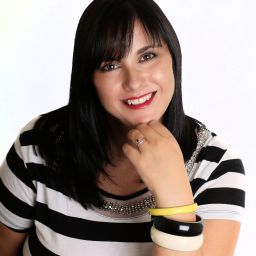